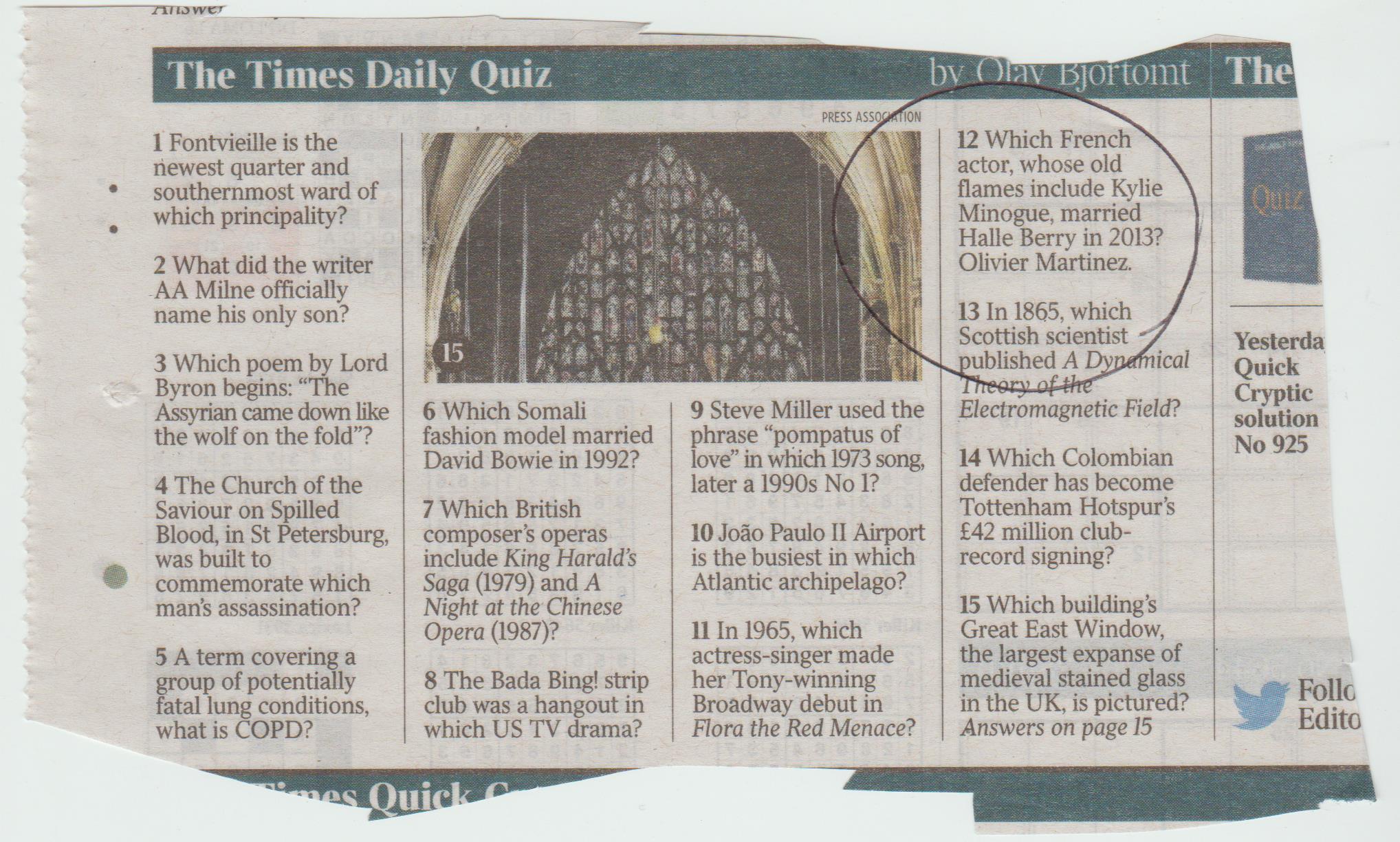 What a giveaway: Quiz and puzzle pages must be rigorously checked because they are read much more than all the rest of a newspaper, and frustrated puzzlers will complain in droves.

An obituary is no place to try to be smart in a heading. It is disrespectful, bordering on offensive. It would be bad enough if the heading was clever or witty, but this is neither. 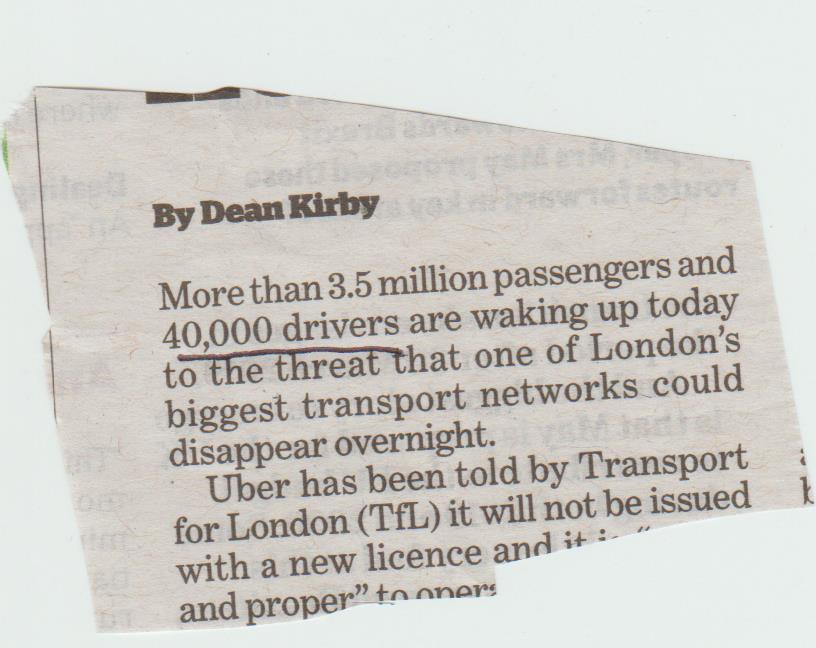 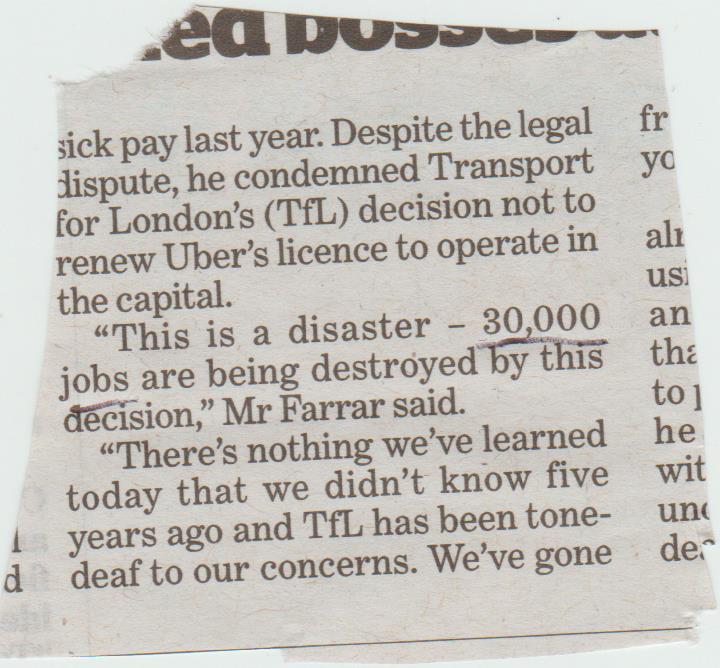 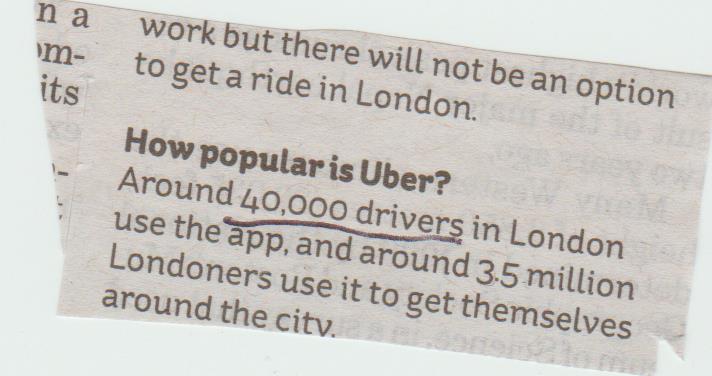 These figures appeared in different stories in the i’s spread on the withdrawal of Uber’s London licence. (There were also two stories giving varying figures for the number who had signed a protest petition, but one cutting disappeared into my printer and refused to come out.) It is always a problem when you have several stories on the same topic, but there are ways to reduce the chance of conflicting figures and facts. The best way is to have one person subbing all the stories in the hope that he or she will spot the clashes. If there is not time for this, and several subs need to be working at once, someone should be given the task of reading all the subbed copy. It can also be a good idea to designate one story as the carrier of figures, and every other one should avoid them if possible.

And finally: I don’t often use literals, or typos as they seem to be called these days, but this one from the same spread seemed appropriate. 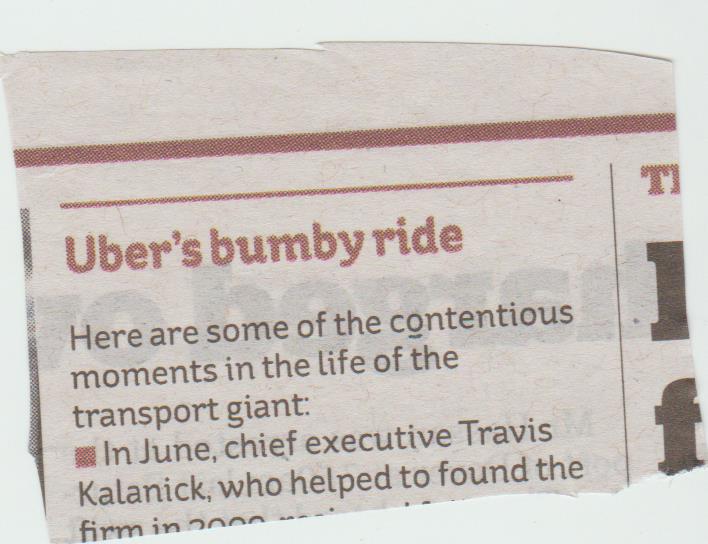 (135 words) I simply cannot understand how someone could read the words ‘one of the world’s largest birds’ without thinking, ‘Hmm, I wonder how big that is?’ or ‘its population plummeted in the 20th century’ without asking, ‘How low did it go?’ A quick look on Google reveals a most dramatic tale, which is not even hinted at in this story. In addition, the phrase in the intro ‘went nearly extinct’ is not recognisable as English, the word condor appears eight times, the picture is no more than a coloured blob, and the heading is a short version of the intro.

Here is the story the i could not be bothered to tell you:

Threatened condor soars above the US again

Three decades after it reached the brink of extinction, the mighty California condor is making a comeback.

The largest flying bird in America, with a wingspan of nine and a half feet (nearly three metres), once patrolled the skies from Mexico to British Columbia, but its population plummeted in the 20th century as a result of hunting, habitat destruction and lead poisoning from shot which killed the carrion on which it feeds.

By 1987 there were only 22 left, and all were taken into captivity to start a breeding programme. There are now roughly 450, about 270 of which live wild in California, Arizona, Utah and Mexico. There are plans to release more on the California-Oregon border.

The success of the programme is attributed partly to reduced use of lead shot near condor feeding grounds. (130 words)

I am baffled by many things: atoms, for example, and moments of force. The greatest mystery, however, is what makes someone with zero curiosity and zero feeling for words say, ‘Yes! Journalism is the job for me!’

So there isn’t a banner across the front saying Dosshouse: Apply Within. Of course it looks ordinary – in fact the stranger things that are going on inside a house, the more ordinary it is likely to look. Bomb factories and houses where murders have taken place do not advertise themselves either.

1. You have to be careful not to suggest that the offence took place at the court, eg ‘He admitted murder at the Old Bailey’. Granted, not many people would seriously imagine that the murder took place in court, or that Rooney was drink-driving at Stockport magistrates’ court, but it looks silly.

2. This construction is called a hanging or dangling participle, and the first clause refers to the first person mentioned after it. So this is clearly saying that the defence lawyer admitted speeding, not Rooney. My favourite example of this going wrong was on Radio 4 a while ago: ‘Fifty years after his suicide, Gordon Brown has apologised to Alan Turing . . . ‘

If I had been subbing this, I would have put both the court and the guilty plea higher up. One way to do this would be in the previous par:

At Stockport magistrates’ court yesterday, Rooney admitted drink-driving and was ordered to complete 100 hours of unpaid work in addition to the driving ban. He was left publicly grovelling for forgiveness. 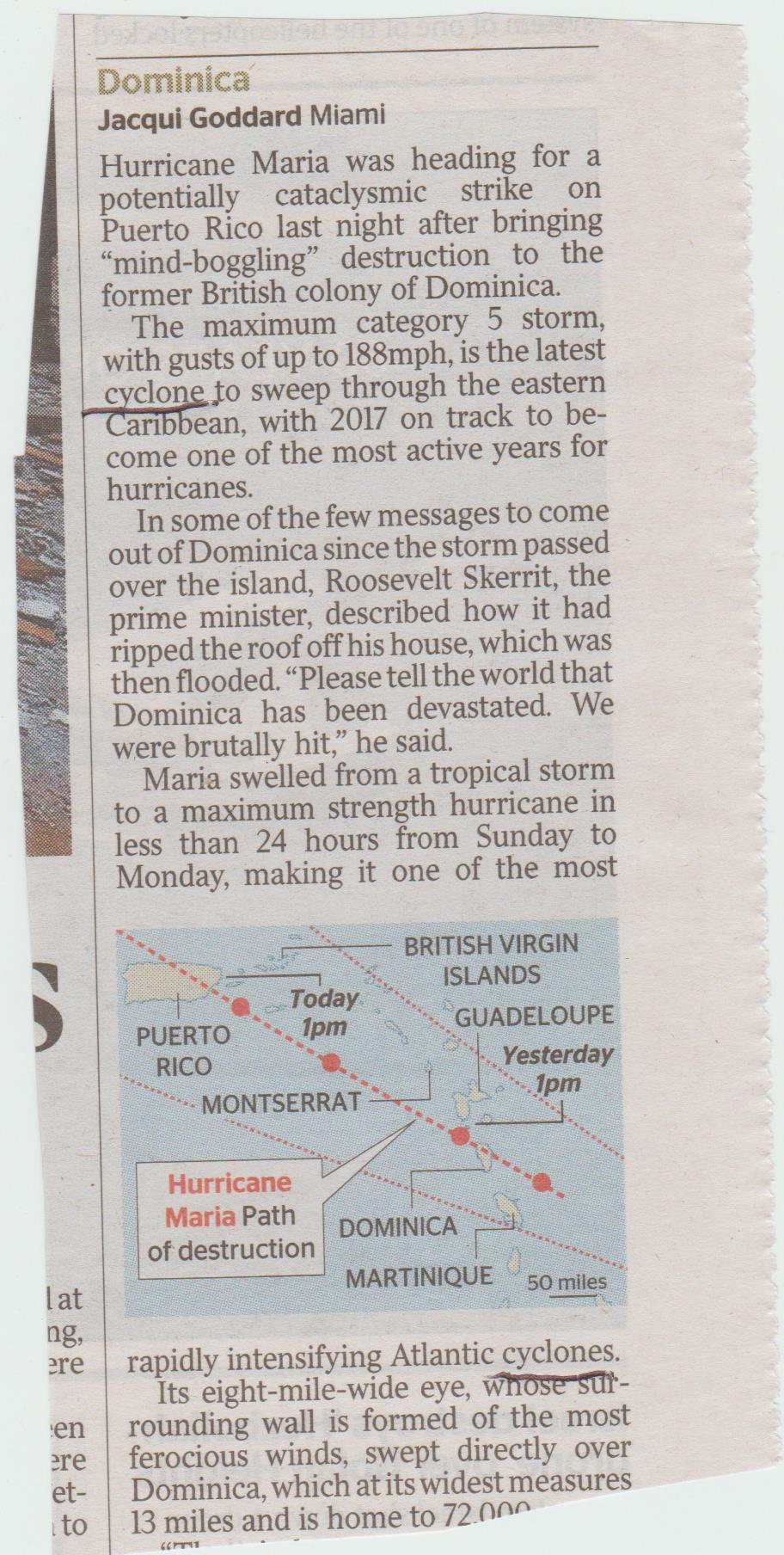 ‘Cyclone’ is not an alternative word for ‘hurricane’.  Cyclones, hurricanes and typhoons are all the same weather systems – rotating clouds and thunderstorms originating over warm oceans, with sustained windspeeds of 74mph or more – but they have different names according to location. If the system originates in the Atlantic or Northeast Pacific (the west coast of the US), it is a hurricane. If it is in the Northwest Pacific, it is a typhoon. If it is in the South Pacific or Indian Ocean, it is a cyclone. There is a generic meteorological term of ‘tropical cyclone’ for systems with lower windspeeds, but once they reach 74mph they are given the title relating to where they originated. Occasionally the west coast of the US receives the remains of a typhoon. 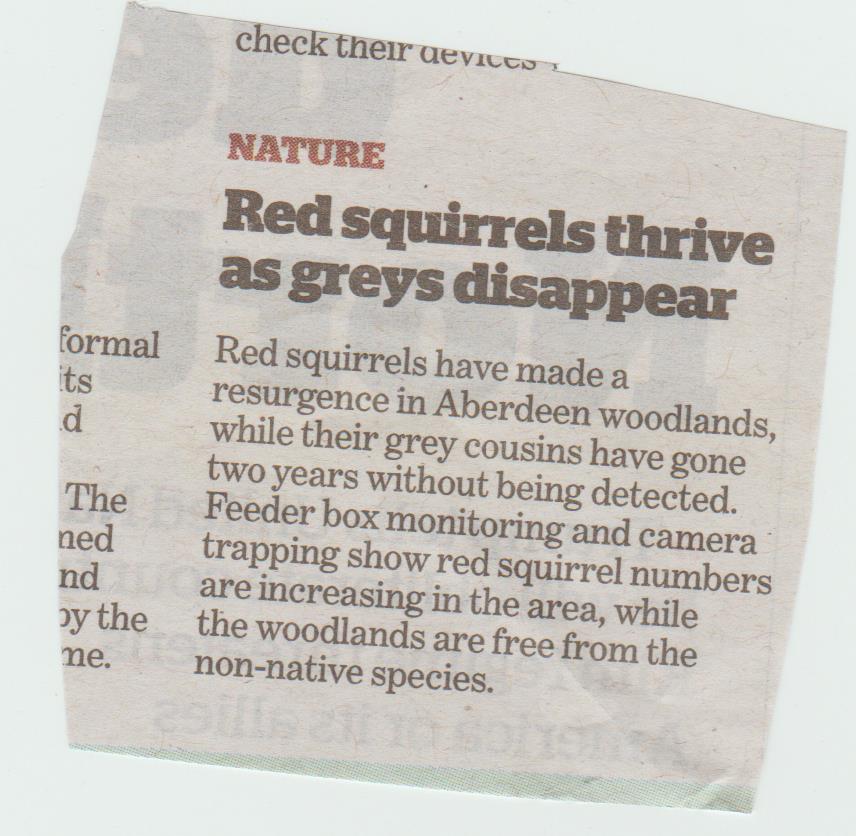 The two sentences in this story give almost identical information, but do not tell you the answer to the obvious question: Why has this come about?

Red squirrels have made a resurgence in woodlands round Aberdeen, thanks to a campaign to trap their non-native grey cousins organised by Saving Scotland’s Red Squirrels. Monitoring of feeding boxes shows that reds are on the increase while no greys have been seen for two years. (46 words)

Look after your shorts

All too often shorts seem to be flung in to fill a hole, but they can be a lot more interesting than some of the other worthy stuff in a paper, and they deserve handling with thought and care. All these examples come from Page 2 of the i newspaper, September 18, 2017. 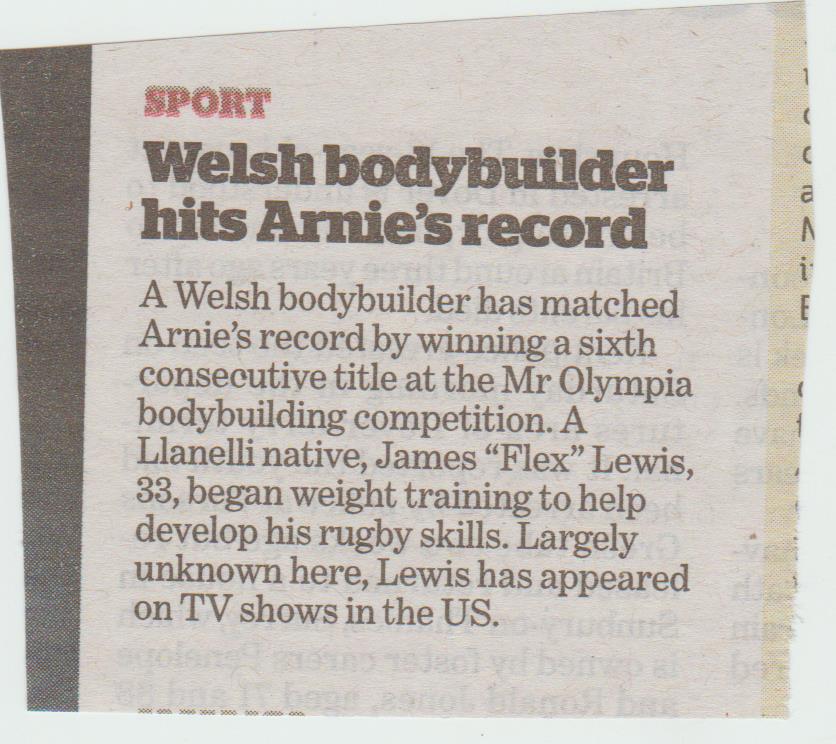 (41 words) I guessed the ‘Arnie’ referred to here was Schwarzenegger, and I was right. However readers should not have to guess or assume. On the other hand, there can be too much spelling out – you don’t need to say that a bodybuilding contest has been won by a bodybuilder. The heading should not be a short version of the first sentence. I would suggest doing it like this:

Welshman muscles
in on Arnie’s record

A businessman from Wales has matched Arnold Schwarzenegger’s record by winning a sixth consecutive title at the Mr Olympia bodybuilding contest in Las Vegas. A native of Llanelli, James ‘Flex’ Lewis, 33, is a celebrity in the US where he now lives. (42 words) 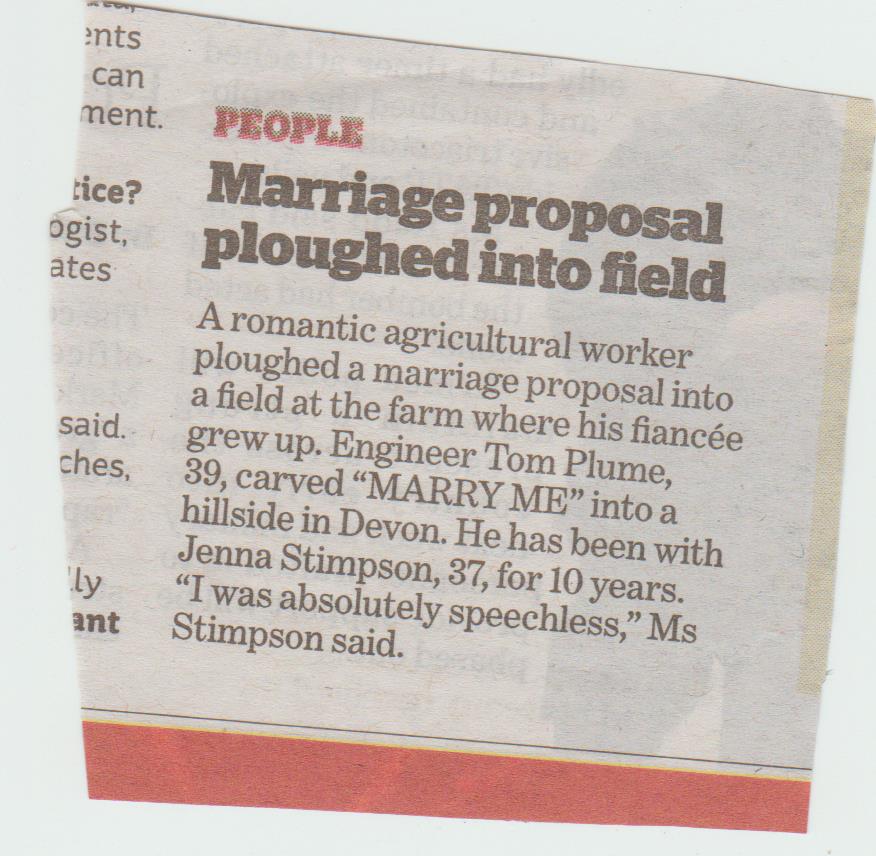 (40 words) Another assumption – that by calling the lady a ‘fiancee’, we will guess what her answer was. You need to spell it out for the drama. I was puzzled how an ‘agricultural worker’ could also be an engineer. Turns out he is an agricultural engineer.

This would be my effort:

Agricultural engineer Tom Plume, 39, surprised his girlfriend of ten years by ploughing ‘Marry me’ into a field at her family farm in East Anstey, Devon. ‘Astounded but ecstatic’ Jenna Stimpson, 37, accepted and the couple plan to wed next year. (41 words) 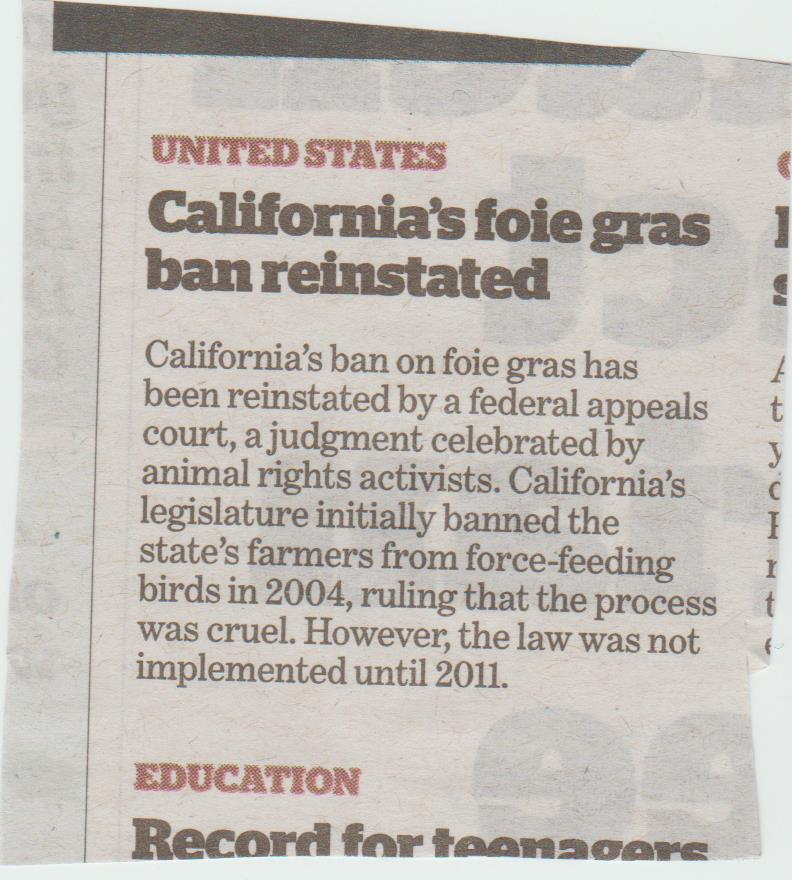 (47 words) As it stands, this story is nonsense. It ends with the ban in force, so how can it be ‘reinstated’? It misses out the fact that the ban was overturned in 2015.

Animal rights activists are celebrating because California’s ban on foie gras is back on the table. The force-feeding of birds was originally forbidden in 2004 but the ruling was overturned in 2015 when producers of foie gras filed a suit against it. It was reinstated by an appeal court yesterday. (50 words) 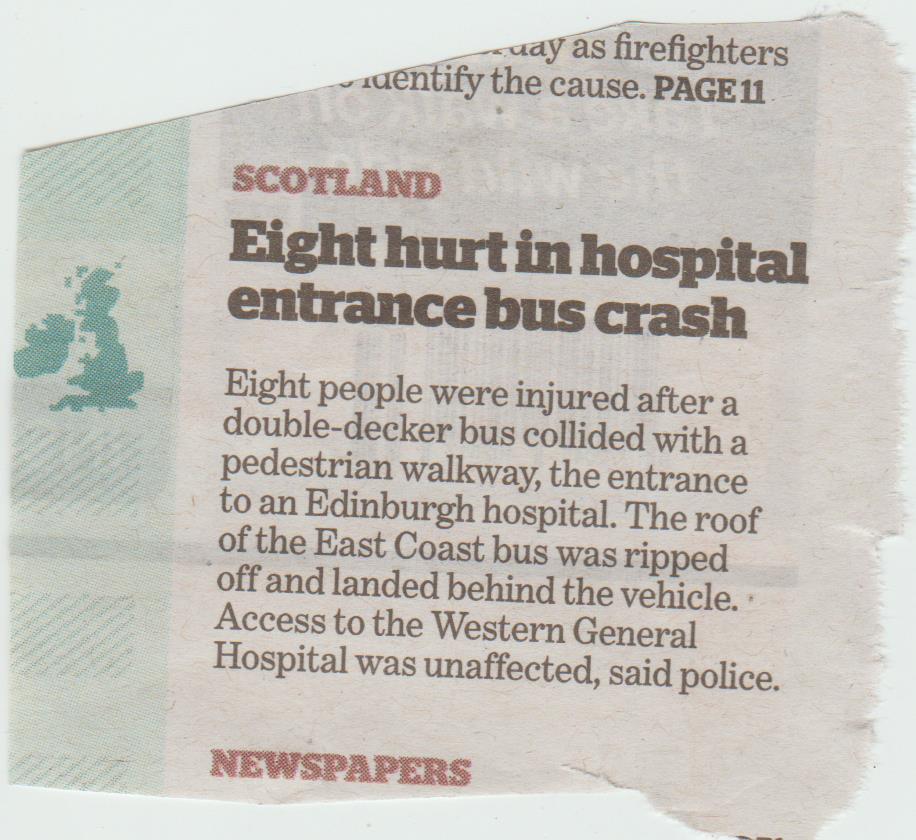 Yet again, some unfortunates get through a perilous situation unscathed only for something else to happen and injure them. For the nth time, ‘AFTER’ DOES NOT MEAN ‘AT THE SAME TIME’.

Thirty people were injured after the explosion on a train at Parsons Green.

Has everyone lost all comprehension of what simple words mean? ‘After’ means ‘later’, not ‘at the same time’. This sentence implies that there was an explosion, then an interval, then something else happened and the passengers (or ‘people’, if you need to distinguish them from the giraffes on the train) were injured. It is obvious nonsense, yet I see it all the time.

All you need here is to replace ‘after’ with ‘in’, and ‘people’ with ‘passengers’, and you get a sensible sentence.

Thirty passengers were injured in the explosion on a train at Parsons Green.