To ‘defend’ a title is not the same as to ‘retain’ it, though the BBC seems to think the words are interchangeable.

‘Defending’ a title simply means that the last winner is in the competition this time. If she wins, she ‘retains’ the title or ‘successfully defends’ it. If she loses, she has ‘unsuccessfully defended’ or ‘lost’ it. 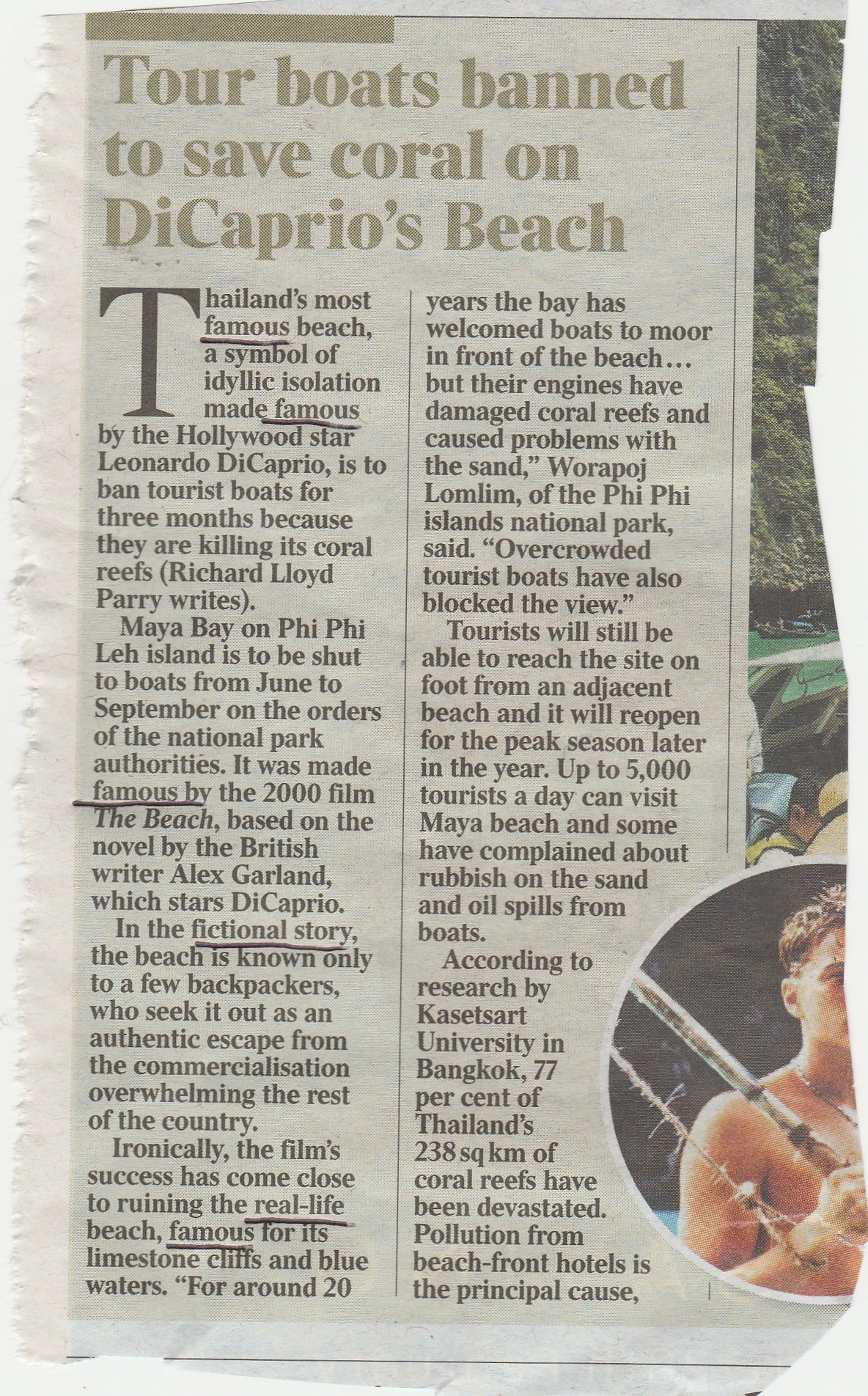 As I have mentioned before, I thought everyone in newspapers knew that if something is famous, you don’t need to say so, and if it is not famous, then it is not true to say that it is. Evidently there is some clot at the Times who has not learned this, and is quite happy to put it in four times in as many pars, and twice in one sentence. Note: a handy attribute for a sub is to retain a memory of the last few words that have passed your eyes to avoid this kind of brainless repetition. Further note: a ‘fictional story’ is a tautology (ie saying the same thing twice), and it is obvious from the context that you are talking about the ‘real-life’ beach. 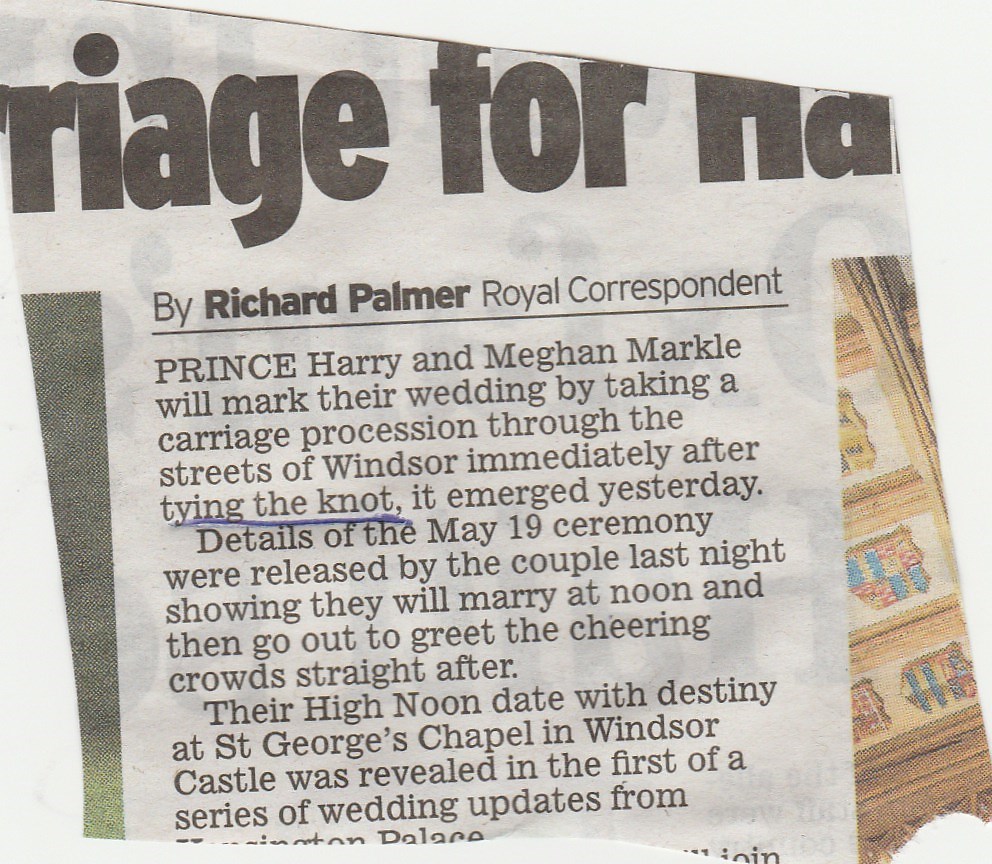 Apart from being a cliche, is ‘tying the knot’ entirely appropriate for a royal wedding?

Prince Harry and Meghan Markle will greet the crowds after their noon wedding with a carriage procession through the streets of Windsor.

Note that it doesn’t say ‘it emerged yesterday’, another tired old formula. In any case the second par says ‘last night ‘ – it can’t be both.

I think I would have restrained myself from using ‘High Noon date with destiny’ too. 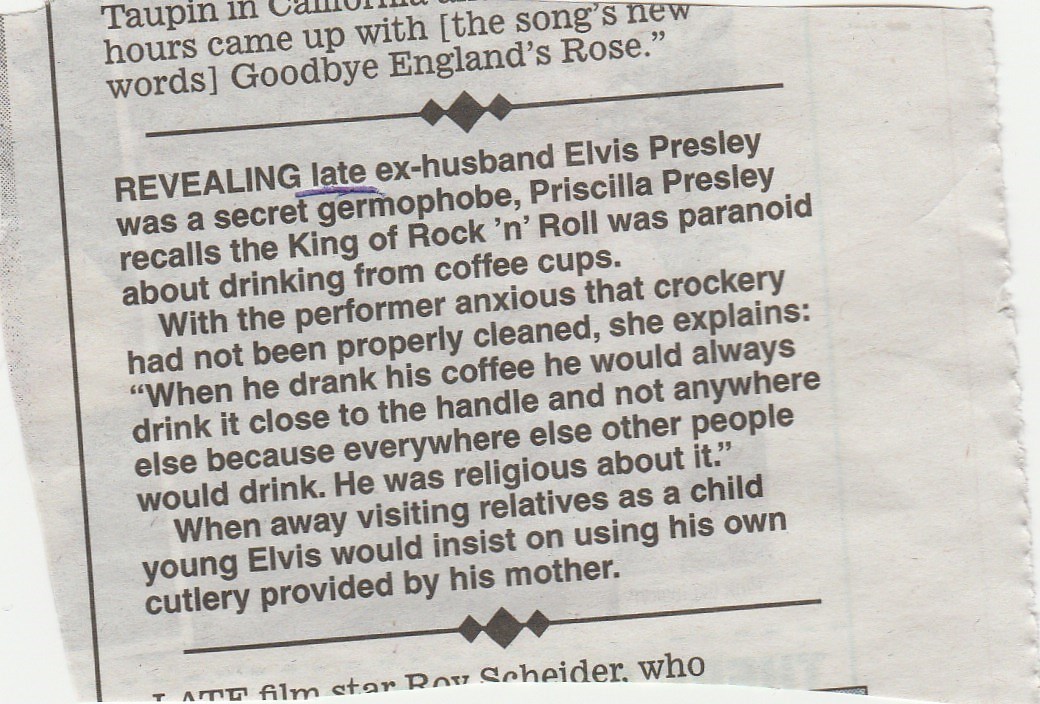 You have to be careful with ‘late’ and use it only if there is a chance that readers will not know someone is dead. There can scarcely be a person on the planet who doesn’t know that The King died on August 16, 1977. 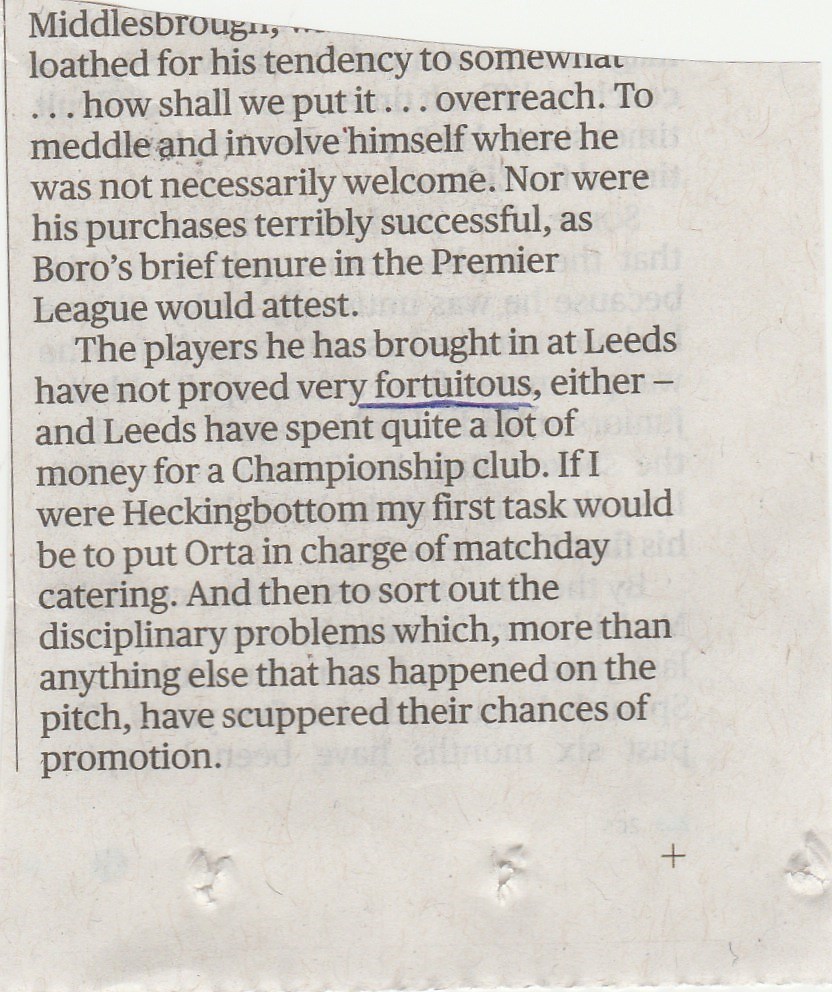 ‘Fortuitous’ means ‘happening by chance’ and is applied to events or situations. For example, ‘it was a fortuitous meeting’. Technically it does not suggest whether the chance was a good thing or a bad thing, but nowadays it tends to be used in a ‘good’ context. Either way, obviously it cannot be applied to a person or a group of people. I’m at a loss to think what word was wanted here. ‘Effective’, maybe? It is yet another example of someone thinking a long word is smarter than a short one, and ending up looking foolish. 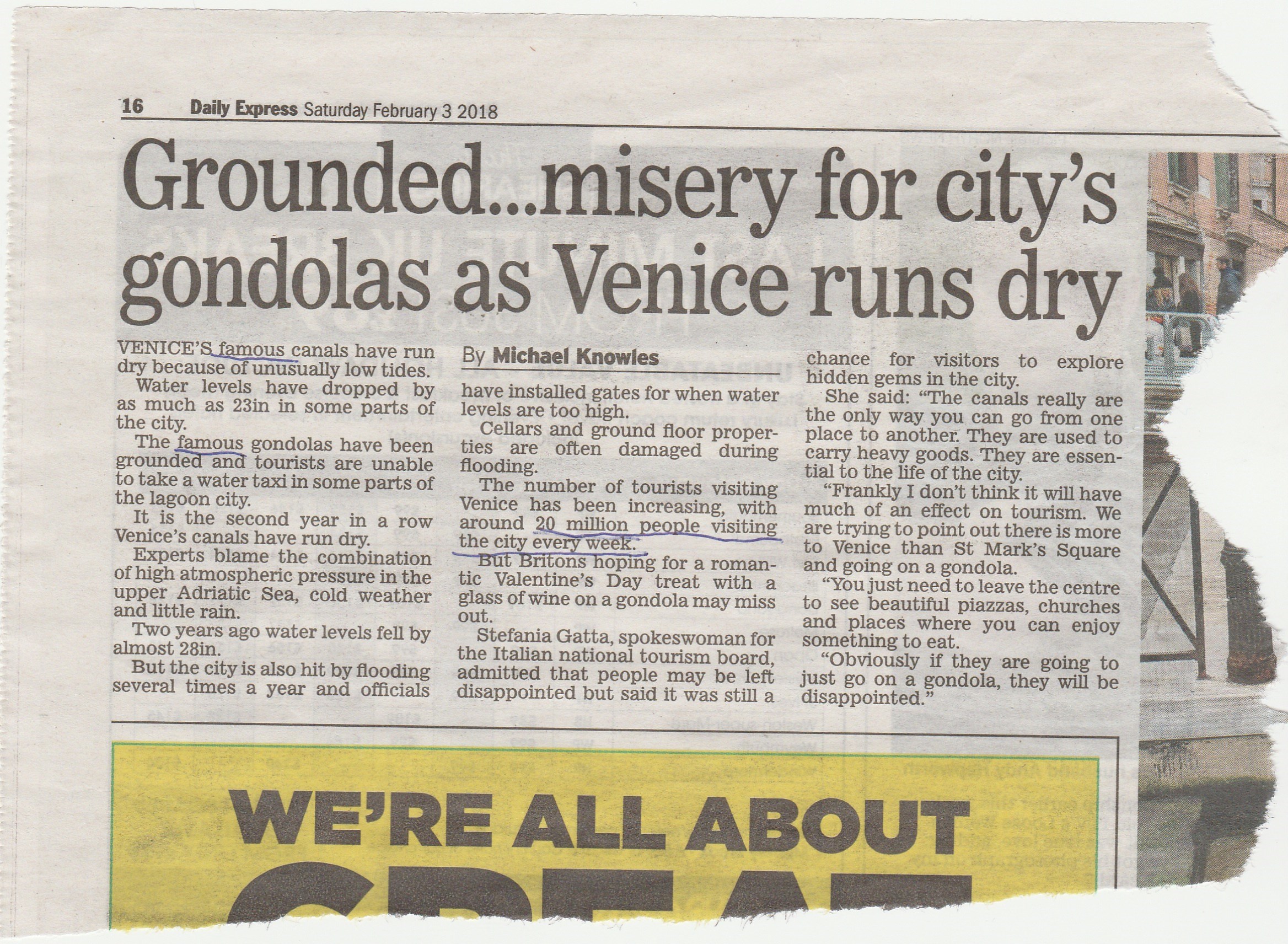 It’s hard to know where to start with this, but let’s go for the statement in the middle leg that Venice is visited by 20million people a week. This is about a third of the population of the UK. A nano-second’s thought would have made it clear that this is ridiculous. To be a sub or a writer, there has to be a modicum of connection between the brain and the fingers on the keyboard. Whoever put this through is an idiot, plain and simple. As a matter of interest, 20million is the estimated number of tourists a year to Venice.

How about ‘famous’ appearing in the first and third paragraphs? If something is famous, you don’t need to say so, and if it isn’t famous, then the description is wrong. I thought everyone on newspapers knew this.

What about the heading? ‘Misery for gondolas’? As if a boat were capable of emotion. Stupid, stupid, stupid. 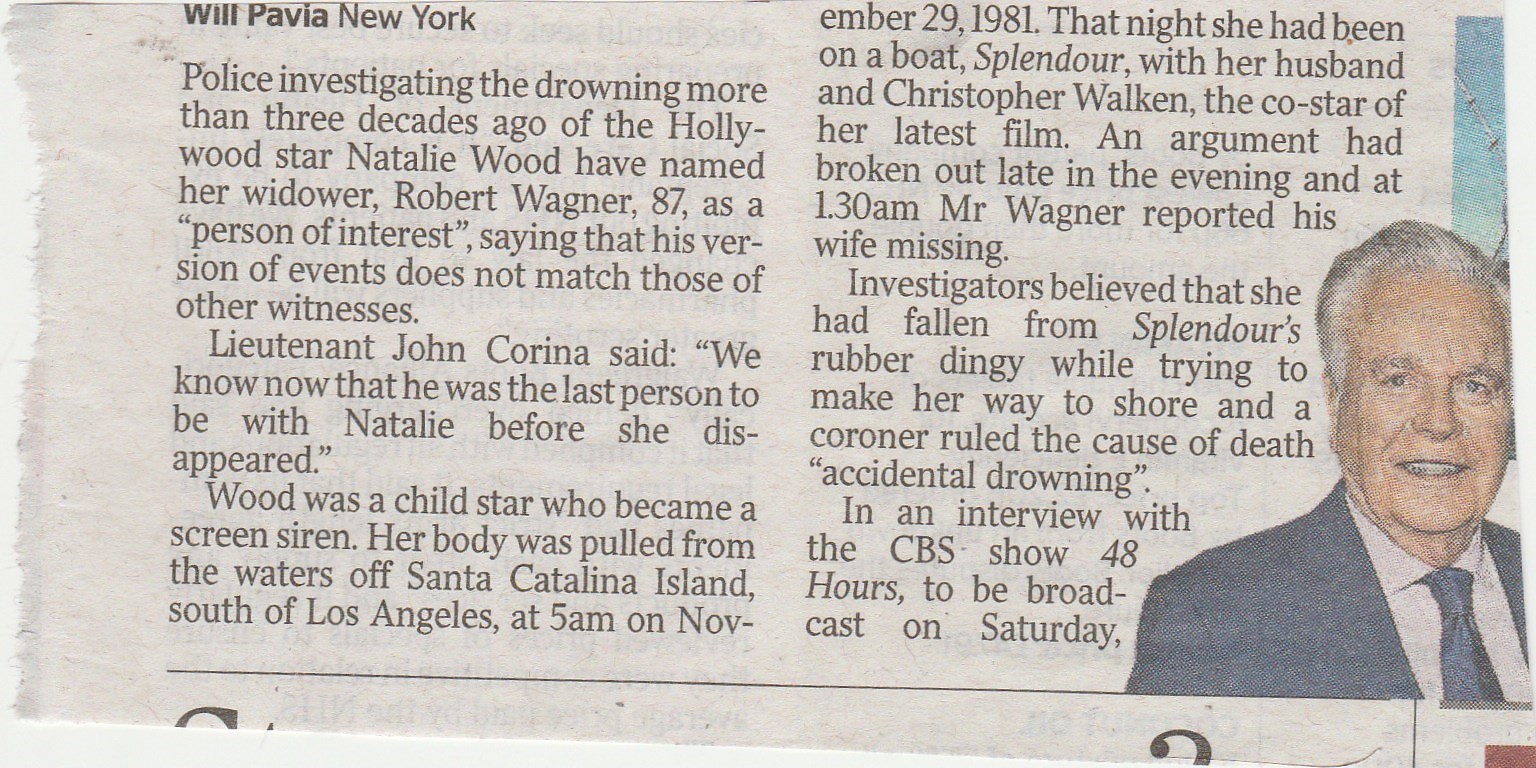 I believe this is evidence of the problem facing most newspapers, namely that their staffs tend to be (cheap) young people who lack background knowledge of culture, history and much else, but their readership is mainly quite a bit older. Thus, most Times readers will know about the death of  Natalie Wood, but it looks to me as if the headline was written by someone who had never heard of her. She was, after all, a star in her own right, not just a ‘film star’s wife’, and her death has been a mystery ever since it happened. This heading could have been written any day in the intervening 35 years. The i newspaper showed how it should be done:

The names of Wagner and Wood are so well known to the readers that they must appear in the heading. The use of ‘in the frame’ is good, with its double reference to films and suspicion.

Message from the Lost Cause Department: When I started subbing, there was a range of ages on the table from beginners to those who were on the brink of retirement, and a range of backgrounds from tea boy upwards. This structure has been demolished and now most staff are comparatively recent graduates, with inevitably limited experience of the world. Donald Rumsfeld was mocked when he pointed out that there are ‘known unknowns’ (things you know you don’t know) and ‘unknown unknowns’ (things you don’t realise you don’t know), but he was right, and the latter are the ones that cause the trouble. Of course a young person won’t know everything, and that is the advantage of having older people around to guide and help. But they are more expensive, and that is all that seems to matter.

You have to be very careful with the conjunction ‘but’. It means that what follows is unexpected. So this intro suggests that it is surprising if a woman who met her husband-to-be when she was a teenager, or one who was pregnant when she married, goes on to achieve a wealthy lifestyle. Beginning the third paragraph begin with ‘but’ suggests that the wife did not deserve the award, when that is not for the Times to say – it is the subject of the hearing being reported.

In any case this is a terrible way to tackle the story. It is near-criminal to have three long paragraphs of background before getting to the ‘yesterday’ line.

However there are obviously some pros at the Daily Express, who showed how it should be done: 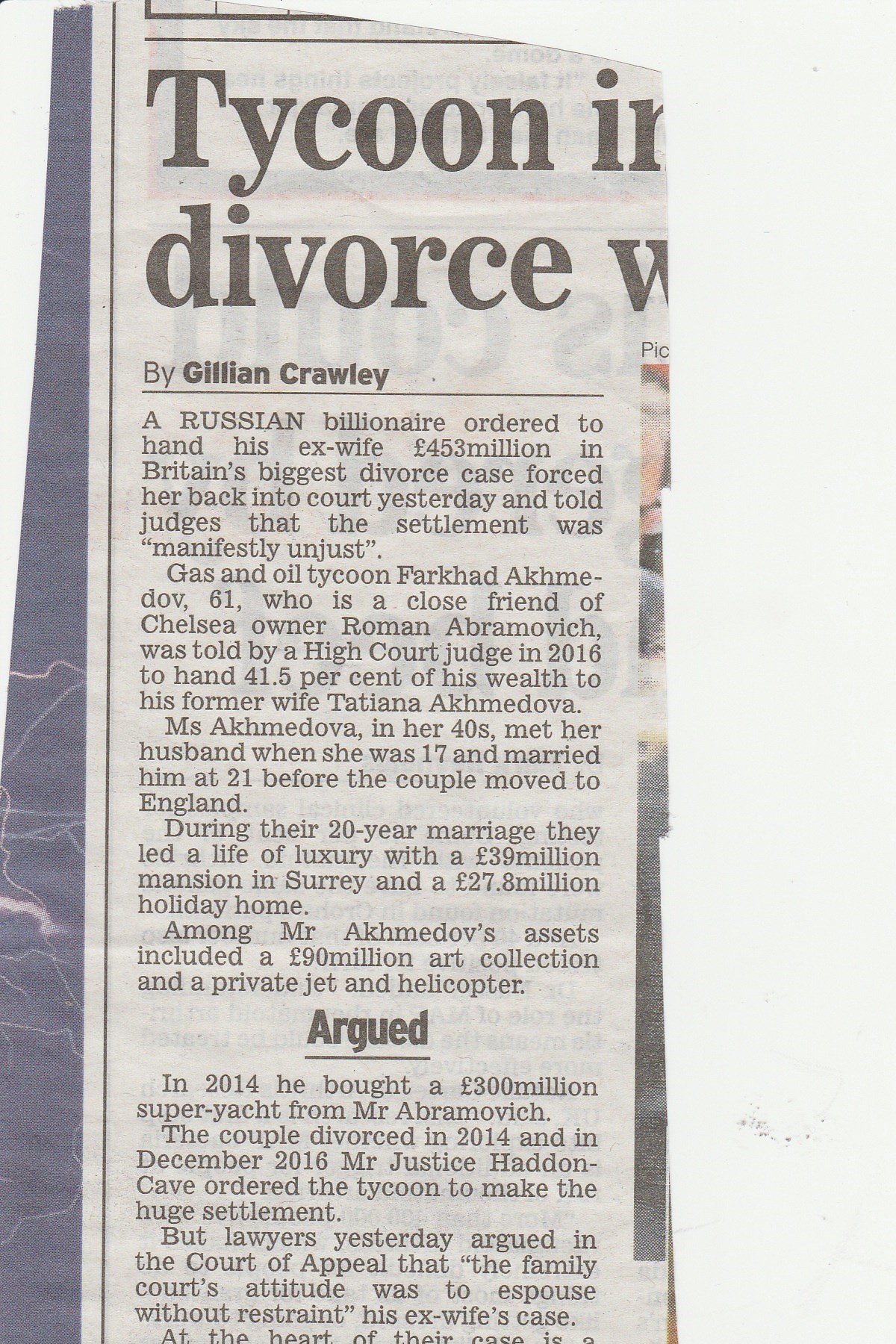 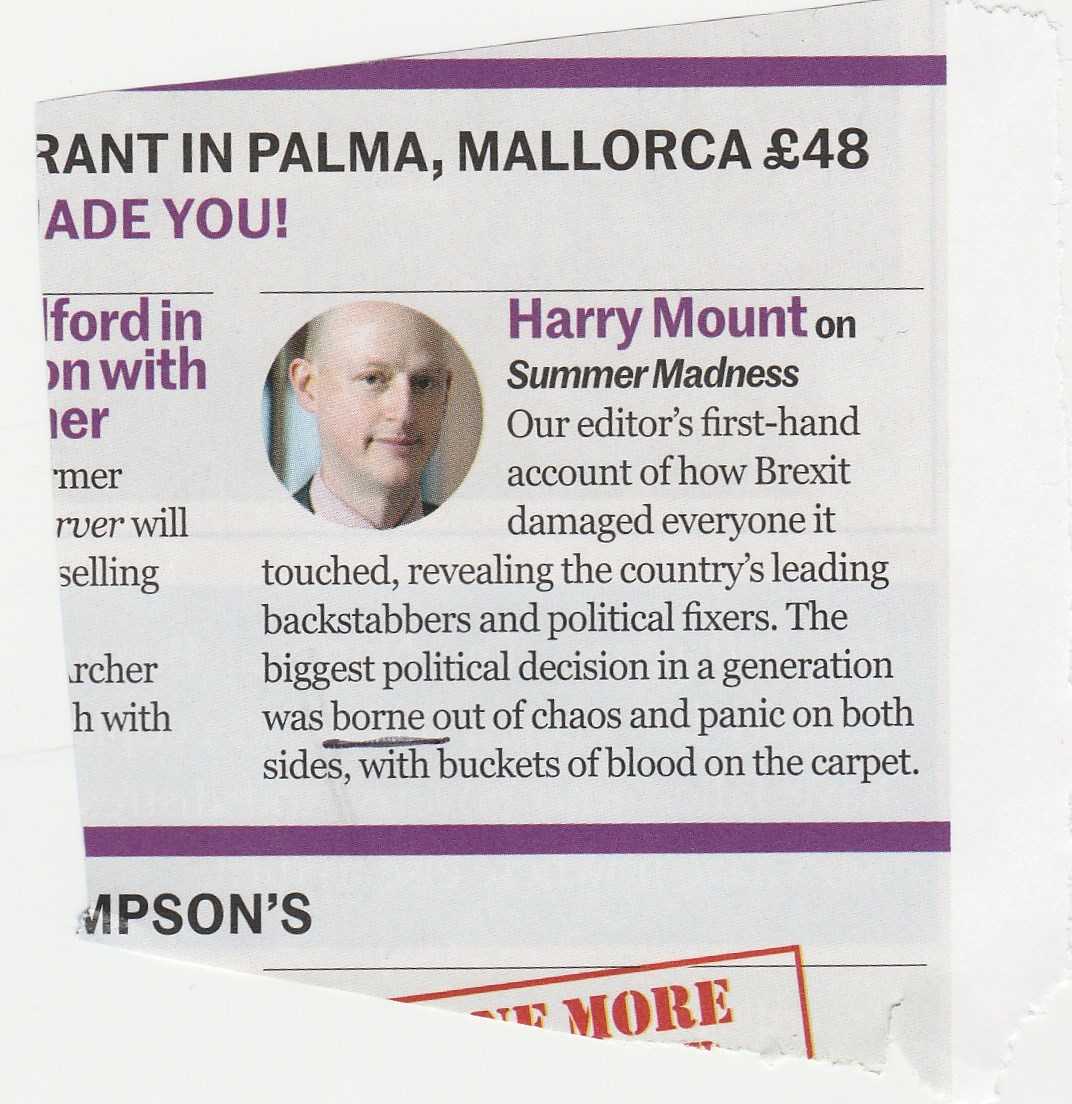 ‘Borne’ means carried, as in ‘water-borne’. The word wanted here is ‘born’, to do with birth.