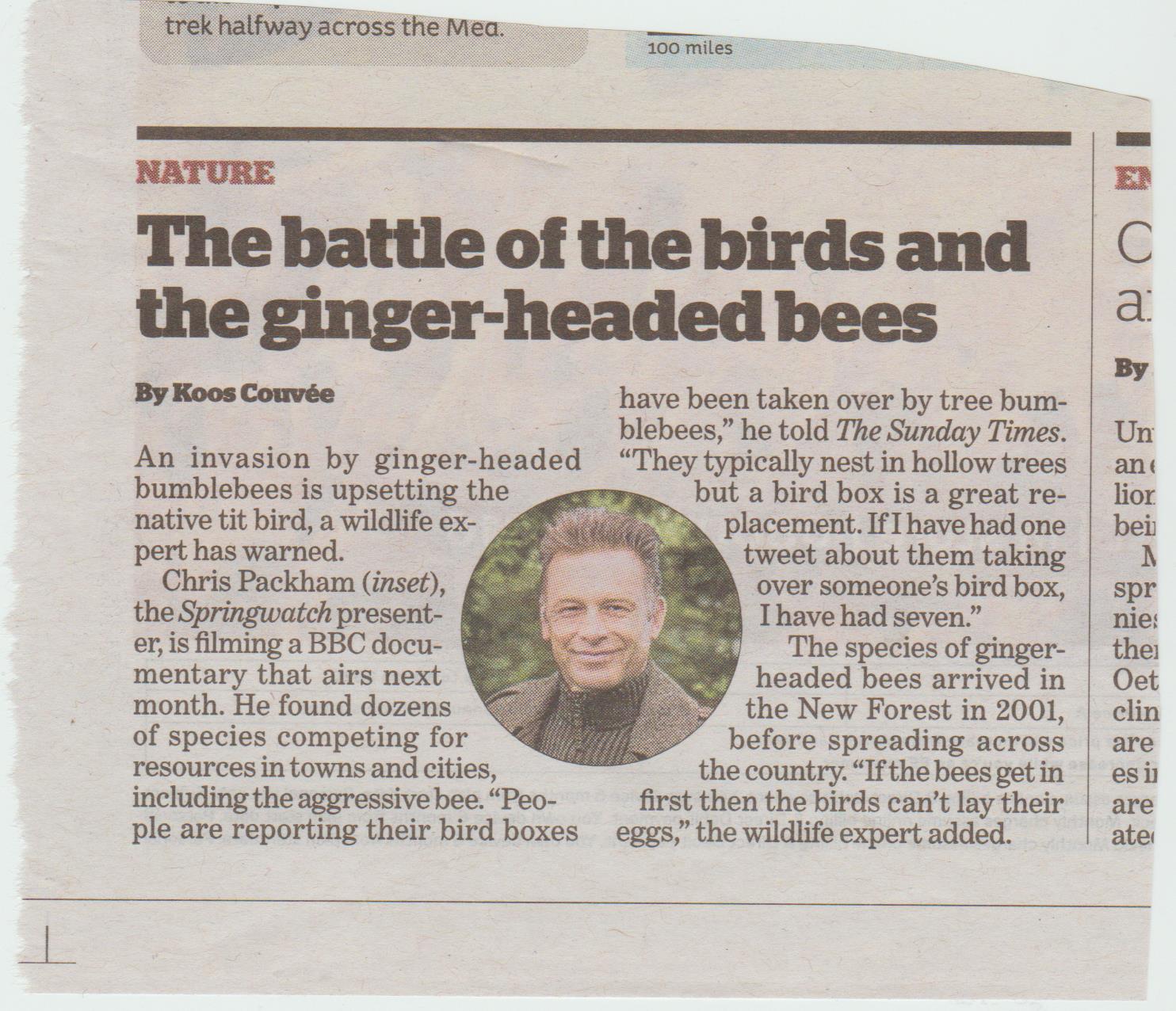 (130 words) This is typical of the sloppy approach often taken to wildlife stories. It appears from this that the arrival is called the ginger-headed bumblebee, when in fact it is called the tree bumblebee. This name turns up in the quote, but only as a puzzling anomaly. It is conventional (and sensible) to give the Latin name of a species which may be new to readers. It should be in italics, with the first name capped (in this case Bombus hypnorum). The story says the bee arrived in 2001, but where from? The answer is Europe. It would be worth adding that the charity Buglife describes the tree bumblebee as a ‘fantastic pollinator which does no harm to native wildlife’, to offset the suggestion in the story that it is a menace (though seven tweets does not indicate a major problem to me). Buglife also specifically says that the bee is not particularly aggressive. ‘The native tit bird’ is a most peculiar phrase. Finally, instead of the familiar face of Chris Packham, wouldn’t it be a good idea to use a picture of the bee in question so that readers can recognise it?

In earlier times a sub would have had to go the office library and try to find information from cuttings and reference books. Now it is available instantly on the internet. I can see no excuse for putting through such an incomplete and lazy story. If the copy is poor, it is the sub’s job to improve it. Otherwise there is no point in doing the job, is there?

A European bumblebee which has recently arrived in Britain is upsetting native birds, according to wildlife expert Chris Packham.

He says the tree bumblebee (inset), which has a distinctive ginger head, is taking over nestboxes, preventing birds such as bluetits from laying their eggs.

The Springwatch presenter has been filming a BBC documentary on urban wildlife which airs next month. He found dozens of species competing for resources.

‘Tree bumblebees typically nest in hollow trees but a bird box is a great replacement,’ he told the Sunday Times.

The tree bumblebee (Bombus hypnorum) was first seen in the New Forest in 2001 and has spread across the country. The charity Buglife says it is a welcome immigrant, describing it as ‘a fantastic pollinator which does no harm to native wildlife’. (132 words)