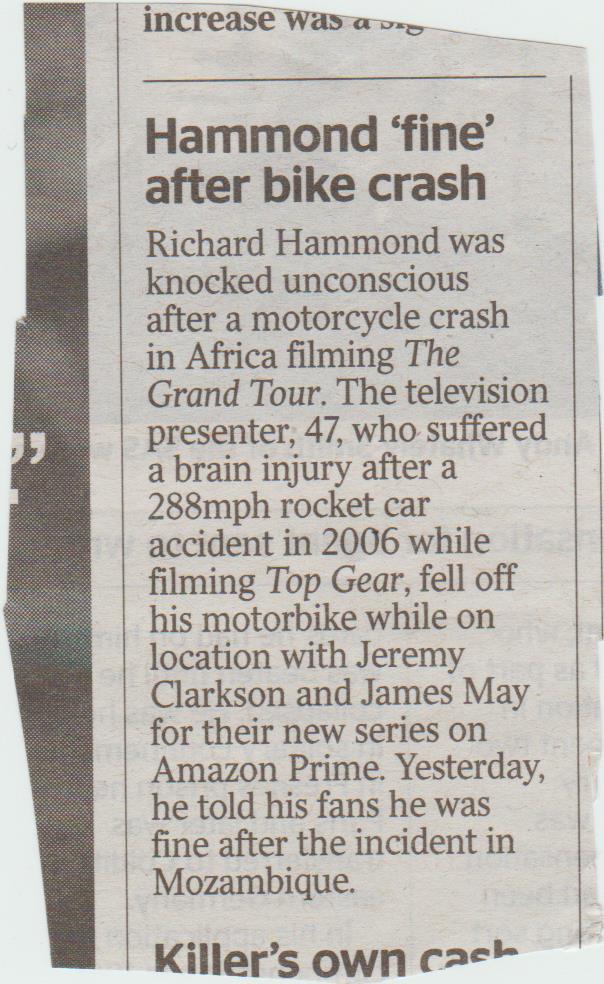 ‘After’ does not mean ‘at the same time’. The implication of this piece is that Richard Hammond crashed his bike then someone came along and hit him over the head, and that the same thing happened after his previous accident with the rocket car.

Apart from that, the word ‘after’ is used four times in a very short story and heading.

Richard Hammond was knocked unconscious when he fell off a motorbike while filming The Grand Tour in Africa.

The 47-year-old TV presenter [note: not the TV presenter, 47, which is clumsy] suffered a brain injury 11 years ago [I think this is better than 2006 because the reader does not need to calculate how long ago it was] when a rocket car he was driving for Top Gear crashed at 288mph.

The latest accident happened in Mozambique, where Hammond was filming on location with Jeremy Clarkson and James May for their new series on Amazon Prime.

Yesterday [I don’t see any need for a comma] he told his fans he was fine.

For more than 50 years their image has hung unmolested on the walls of the National Gallery, alongside well known and well loved works by such titans of British art as Stubbs, Hogarth, Reynolds, Turner and Wright.

On Saturday, however, Thomas Gainsborough’s portrait of William Hallet and Elizabeth Stephens, The Morning Walk, came under attack from a man armed with a screwdriver.

Staff and gallery-goers rushed to detail the man, who was restrained until members of the police arrived at the scene in Room 34 on the second floor of the museum.

This is lamentable. Yet another dreadful intro on a good story. The lengthy list of painters looks like nothing but an attempt to show off (‘Name as many British artists as you can in 30 seconds’). What does it matter how long the picture has been in the National Gallery? ‘Unmolested’?! ‘Titans’ is a joke word.

All that is needed is a straight intro:

A man has been arrested after one of the National Gallery’s best-known masterpieces was slashed with a screwdriver.

In the second paragraph, Mr Hallett’s name is mis-spelled. In the third, I presume ‘detail’ should be ‘detain’. Frankly, such carelessness suggests contempt for the reader. And ‘members of the police’ is a very odd way of saying ‘police’. I despair. 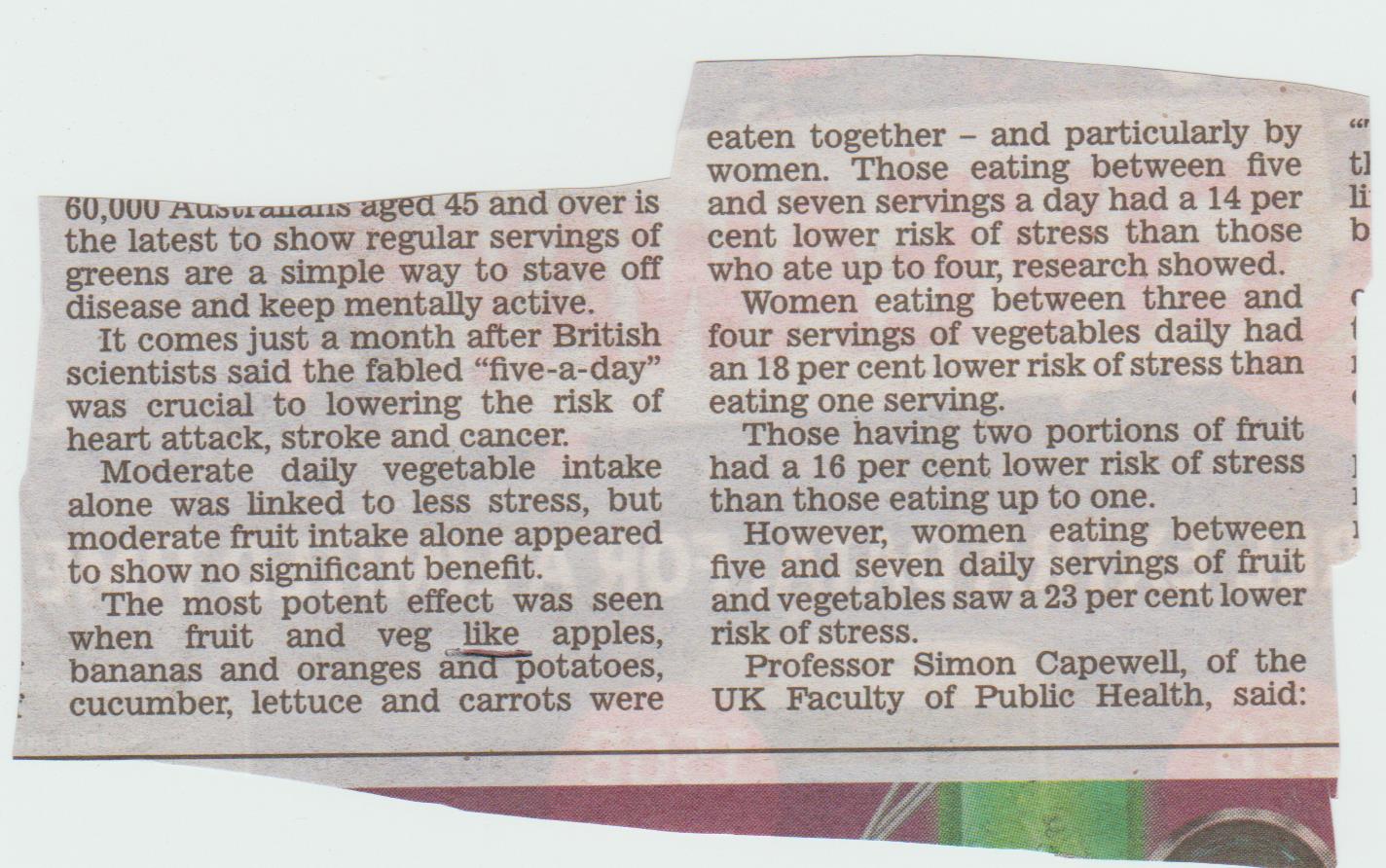 Two examples in one piece of dashes where commas would be better. To quote from Style Matters:

dash: Use sparingly. They hold up the sentence and make the copy look ‘spotty’. In most cases they can be replaced by commas, or even deleted. They should be used only for a surprising twist to a sentence, such as ‘Jason Bugby is three months old – but he is already a member of Mensa’, or to enclose something which does not fit into the main subject matter of the sentence, such as ‘Despite spending so much time abroad – last year he was in England for only two months – Lord Freeman maintains a fully staffed house in Hertfordshire’.

I would have done the second paragraph thus:

So it is fitting that the programme is to return after a 14-year break with another Liverpudlian, her great friend Paul O’Grady, hosting it. [I have dropped the comma after ‘break’ because it is not necessary.]

In the last par I would simply replace the dashes with commas.

Incidentally the caption would be better with a colon instead of three dots (ellipses). If you really must use ellipses, there should be a full space at each end and half spaces in between the dots. 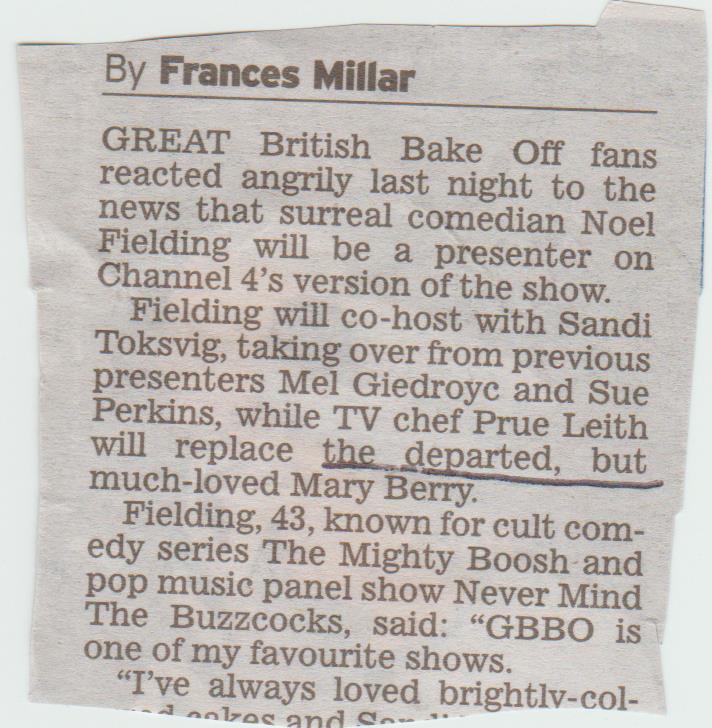 Why ‘but’? It makes it sound as if it is surprising that Mary Berry is much loved. Obviously she has departed (not a word I would use anyway, with its connotations of ‘dear departed’) or there would be no need to replace her. How much better and simpler it would be to put ‘will replace the much-loved Mary Berry’.

Kyrgios added: “After a restless night of being sick I have nothing left and to play a great champion like Roger, I need to be at my best to have a chance.”

“I don’t take this decision lightly, these are the matches we train for but I’m in no fit state to take to the court. I’m sorry to the fans but I have to put my health first and I hope you understand.’

“I want to wish Roger the best of luck for the rest of the tournament and thank everyone for their support so far here at the BNP Paribas Open. I will definitely be back. Thank you.” 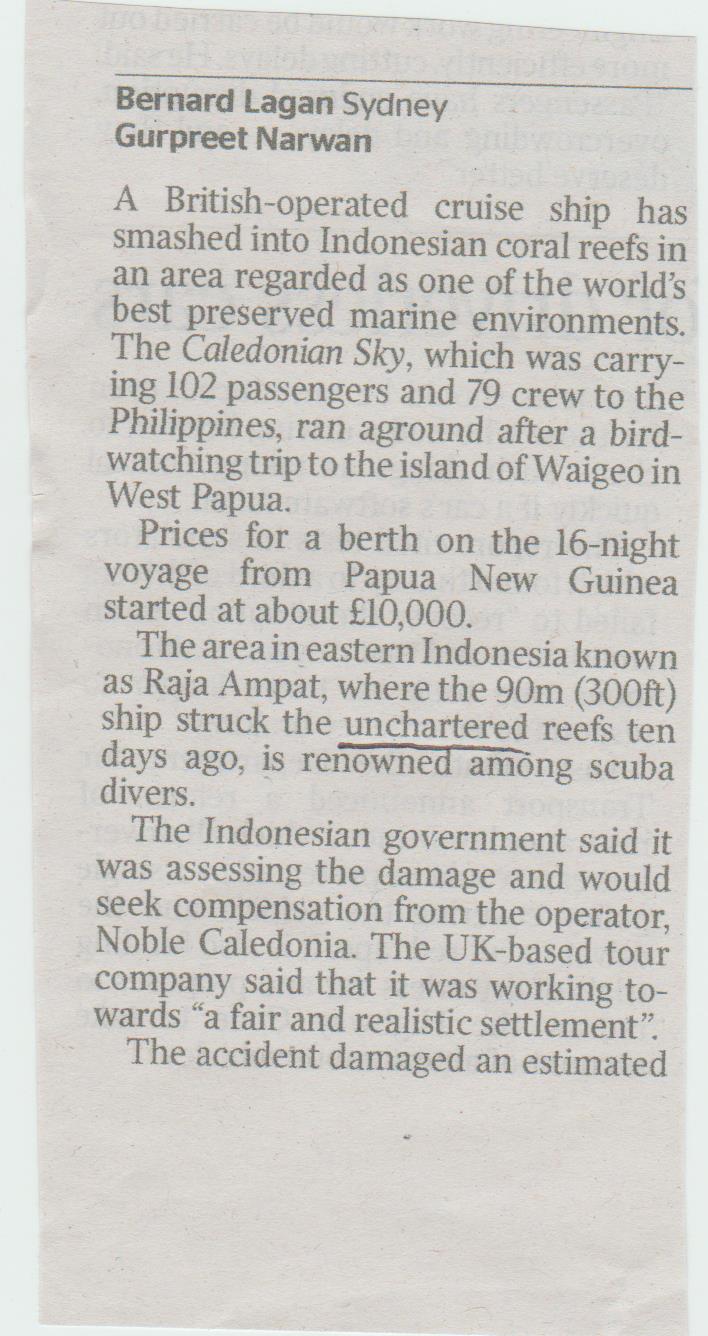 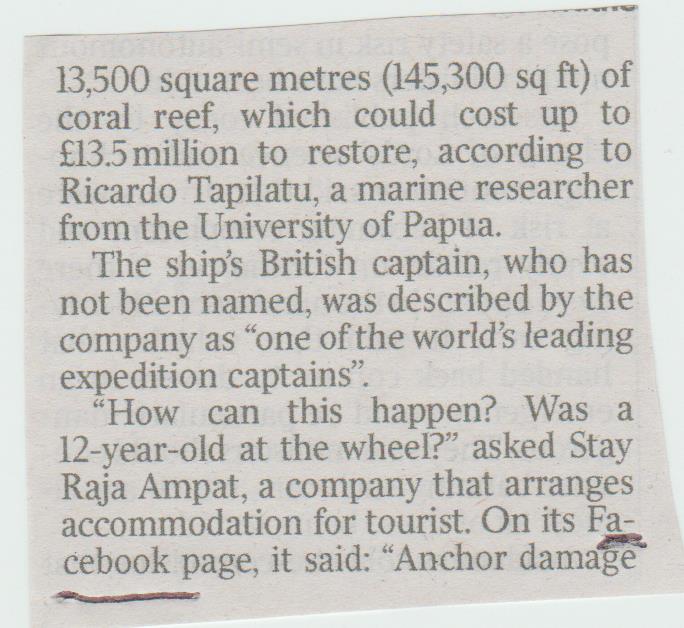 This should say ‘uncharted’ not ‘unchartered’, chart meaning map and charter meaning something else entirely. There is a horrible line-break near the end of the section which a cursory reading of a page proof should have picked up. Words of more than one syllable should be broken between syllables. Proof-reading should also have picked up ‘tourist’ instead of ‘tourists’ in the previous sentence.

One question I would like to have seen answered is how a damaged coral reef can be restored for £13.5million. Are the corals to be paid? 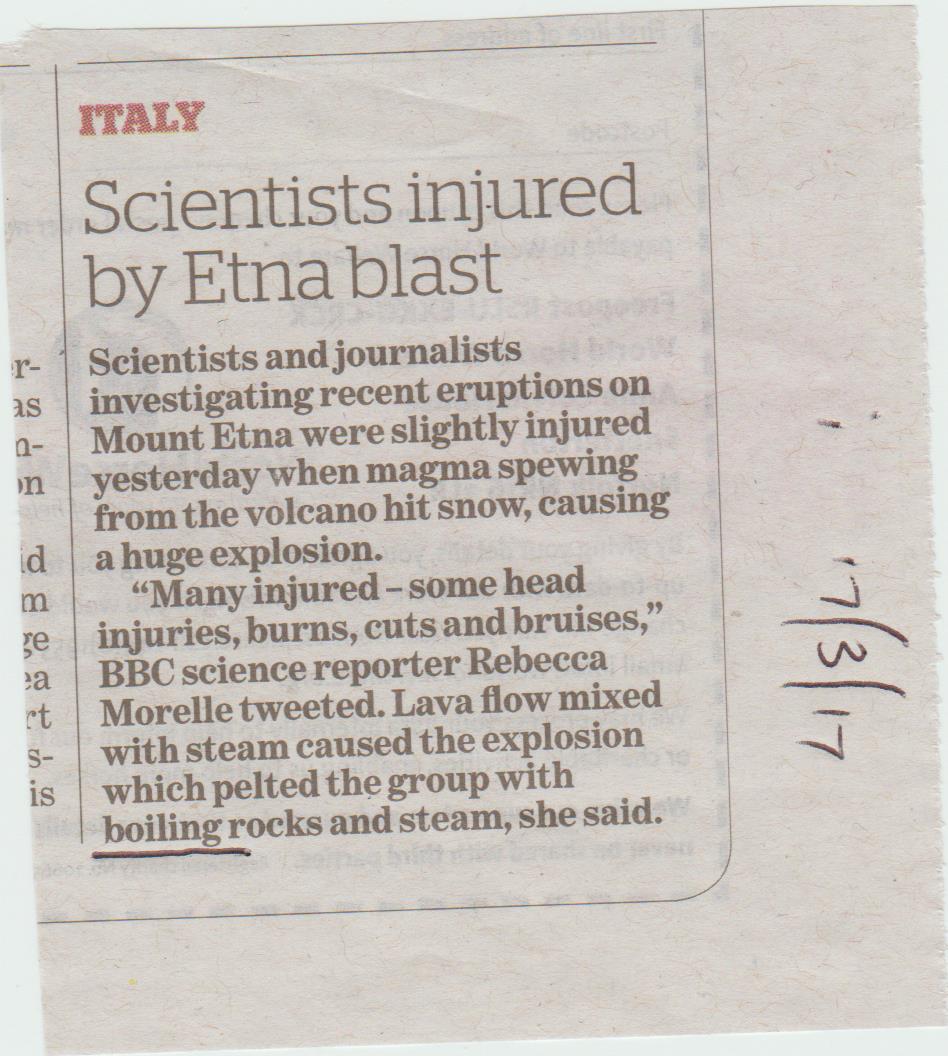 Boiling refers only to liquid and therefore cannot be applied to rocks. Suitable words to describe very hot solid material include sizzling and incandescent, or you could say red-hot, blisteringly hot or searingly hot (note that a hyphen is not needed when the adverb ends in -ly). 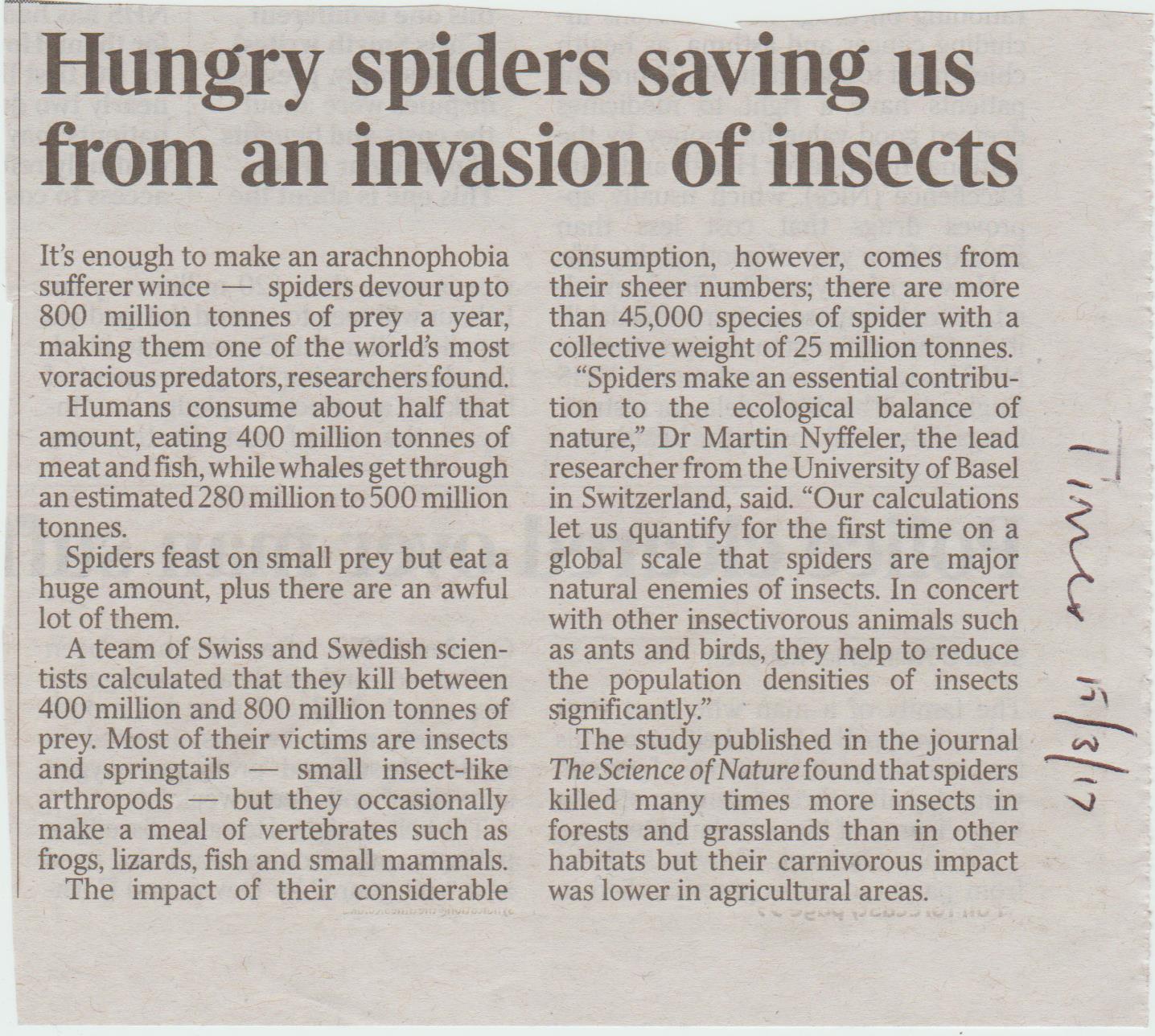 Another unnecessary and dreary attempt to dress up a reasonable intro. Just knock off the words up to the dash. In any case, someone who fears spiders is an arachnophobe, not the clumsy ‘arachnophobia sufferer’. ‘Predator’ and ‘prey’ are repetitive, and I think ‘devouring’ and ‘voracious’ are too similar to use in the same sentence. I would use ‘tons’ rather than ‘tonnes’ since there is almost no difference in weight.

Spiders are among the world’s most voracious predators, feasting on up to 800 million tons of  victims a year, scientists have found.

The slaughter has a major impact on insect populations, they believe.

Although individual spiders eat such tiny creatures, there are a huge number of them – 45,000 species with a collective weight of 25 million tons. A Swiss and Swedish team has calculated that their prey adds up to between 400 million and 800 million tons a year.

Lead researcher Dr Martin Nyffeler, from the University of Basel, [I think Times readers should be expected to know that Basel is in Switzerland, not Sweden] said: ‘Spiders make an essential contribution to the balance of nature. [Then run on the rest.]

This is a rotten sentence.

which is shorter and cleaner (I have also lost the superfluous comma). I would be tempted to turn it round like this

which I think is more elegant.