I wonder how many times a day the word ‘people’ is used? Are we likely to be talking about aliens? Fish? Giraffes? It is obvious that the homes belong to people so you don’t need to say it. You should weigh every word to see if it earns its place. 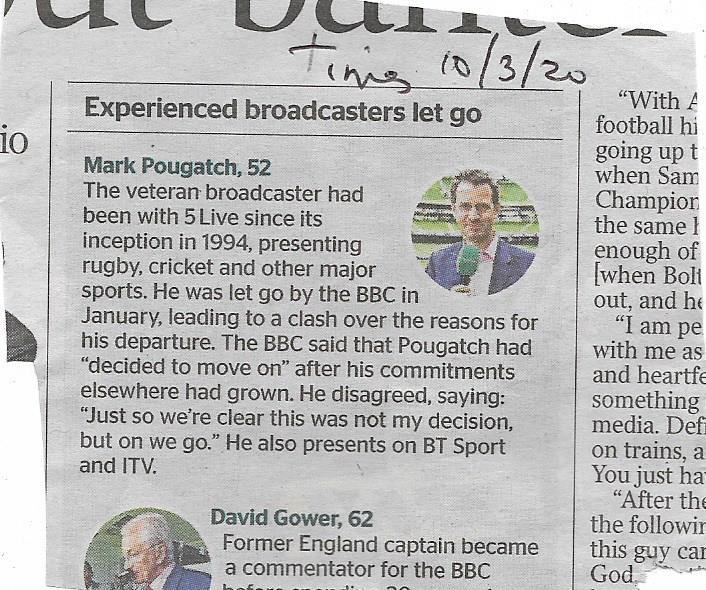 Veteran? At 52? I suppose if you are fresh out of university that is how it seems but you need to remember that most readers of newspapers are at least 52 and will not take kindly to being called ‘veteran’. The same applies to ‘elderly’ and any other reminders that we are not as young as we were.

Romanian cleaner, 47, accused of plotting to steal £50m in jewellery and cash in raid on Tamara Ecclestone’s £70m mansion ‘was caught by police wearing £300,000 diamond earrings’

First we had police painting their nails . . . this shows that you always have to think before hitting ‘send’.

Ii you must have a heading half a mile long, it could have been rephrased thus:

I don’t usually bother with Mail Online because it’s institutionally useless. But here’s a particularly glaring example of its ineptitude.

This is the moment a bride was reduced to tears as she married her terminally ill partner of 12 years who was told he has just months left to live.

Alan Birch, 37, was told he had three to nine months after being diagnosed with an aggressive form of mouth cancer more than a year ago.

The clean-living father from the Wirral, who does not smoke or drink, exchanged vows with Debbie McDonough in an emotional service in front of more than 150 people.

The bride stood proudly beside Mr Birch’s seven children and the newlyweds posed with Laurel and Hardy lookalikes, at Christ Church in Moreton, Dorset.

The loved-up couple were then taken to Leasowe Castle hotel where a 30-minute helicopter ride was laid on for them.

You’d think even the idiots at Mail Online would take care to get things right with something so sensitive. But no.

The couple were married at Christ Church, Moreton, Wirral. But Mail Online has given the location as Moreton, Dorset – 300 miles away. The only explanation for such a ridiculous error is that some reporter or sub has looked up ‘Moreton’ and banged in the first Moreton he saw.

Yet all they had to do was read the copy and see that the reception was held at Leasowe Castle, which is in Moreton, Wirral. If the sub did not know where Leasowe Castle was, he or she should have checked it. Or that the poor bridegroom comes from Wirral – why would a dying man from Wirral travel to Dorset to get married?

The mistake has been pointed out on the Comments section below the story, but remains uncorrected after at least 24 hours. Several other news websites have picked up the story and repeated the error.

Incidentally, I feel the expression ‘loved-up’ is quite inappropriate in a story of this nature. 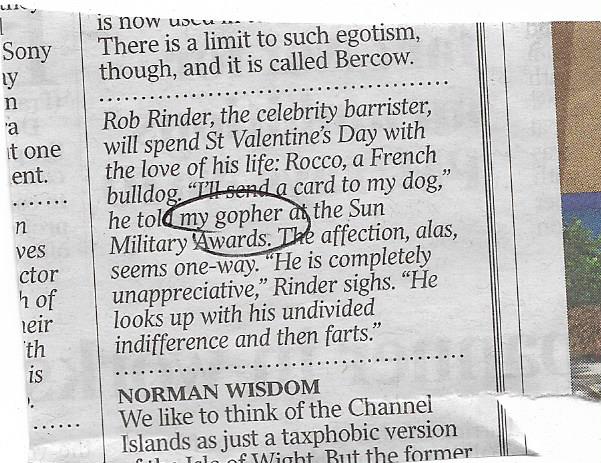 This is a gopher: 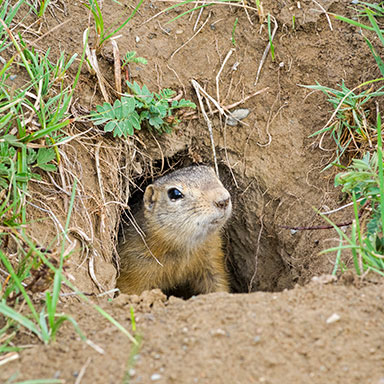 It is a rodent from America.

The word wanted here is ‘gofer’, derived from ‘go for’, meaning a person you can tell to go for something. In other words a dogsbody or assistant. 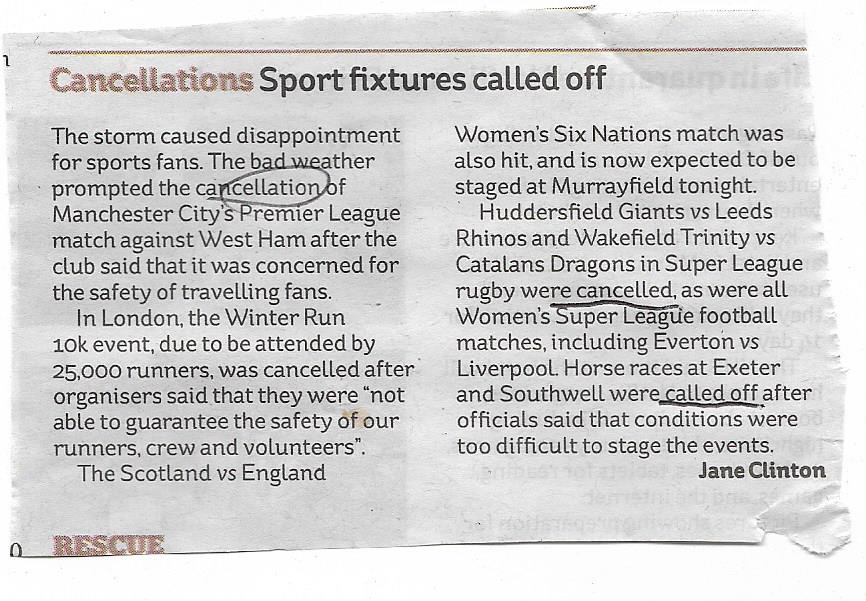 Cancellation means scrapping an event entirely. The only event in this story which was cancelled was the London Winter Run.  All the football and rugby matches were postponed, in other words they will be rescheduled. The horse races were cancelled, but the parlance for this is ‘abandoned’. You could use ‘called off’ for a postponement providing you make it clear that it will go ahead at a later date.

I see this error so often that it will soon be classified by dictionaries as correct. Maybe it already is. Let’s not bother with definitions, let’s just stick any old nonsense down. Let’s not use our wonderfully rich and varied language, let’s reduce it to a couple of thousand words for all occasions.

‘Begging the question’ is a very specific usage. Also known as a circular argument, it involves making a firm conclusion on the basis of an arguable proposition. For example: ‘Why did God make parasitic worms?’ This begs (or avoids) the question of whether God exists. Ninety-nine times out of a hundred the writer actually means to say ‘this raises/leads to the question . . .’ In this case the writer might have said: ‘ . . . making me wonder if they know something we don’t.’ 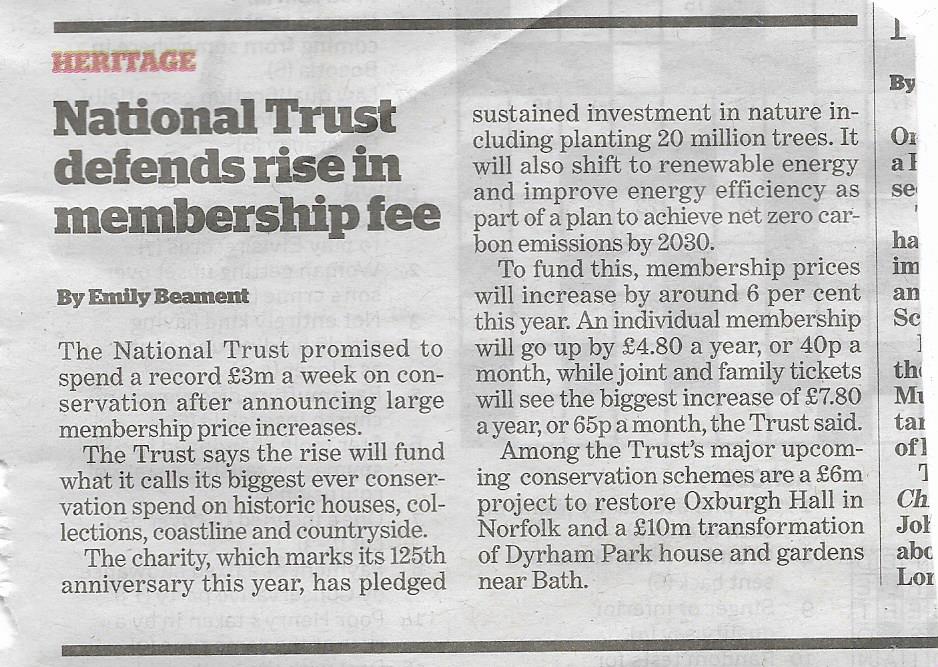 If I were a chief sub, and this had been sent to me, I would have been pretty cross. Without giving the new membership rates, the increases mentioned are meaningless. I suppose given that the prices are going up by 6 per cent and this will mean an extra £7.80 a year on a joint membership, a reader could do some mental arithmetic or get out the  calculator. It is true that the National Trust press release and its website carefully conceals the new rates, but let me introduce a concept which is clearly unknown to many reporters and subs these days – asking a question. Surprising as it may seem, not every story arrives fully formed with every detail in the right place, especially if it is bearing bad tidings such as a price increase. It did not take me long to contact the NT and find out that the new joint membership rate from March 1 is £127.80 a year.

There are some sweetly innocent souls on the Times. Most adults would be extremely wary of pairing the words ‘toss’ and ‘off’. Since this is a family style guide I invite you to see meaning 3 in the Collins Dictionary (my favourite dictionary): https://www.collinsdictionary.com/dictionary/english/toss-off